As I sit in a wooden chair on the platform, surrounded by fighting dogs and cats that could care less about what is happening around them, I look towards the grounds of the park as the sky turns into soft oranges, yellows, and pinks; In the distance I hear the deep roar of an elephant, followed by a sharp trumpet from another.

It’s too early for them to be roaming around the park, they will be in their enclosures for at least another 90 minutes, but I take comfort in listening to them communicate with one another. Today’s goal? Enrichment at Elephant Nature Park for the elephants.

Soon it will be time for Liz McGinley, a long-term volunteer from London, Ontario, to begin working for the day.

Liz’s role at Elephant Nature Park is a relatively new one, providing enrichment to the elephants. The main goal of the enrichment program is to provide exercise and brain stimulation for the elephants, encouraging natural behaviour; using their trunks for eating instead of someone placing food in the elephant’s mouth, giving them boxes to play with and throw around, placing food on the top of a wall and encouraging them to forage and use their trunks, and anything else Liz can think of to engage them.

Shortly after arriving at Elephant Nature Park I meet up with Liz and we walk to the male elephant enclosure; a large enclosure built to keep the bull elephants away from the females, as they can be too aggressive at times and the park has no desire to create a breeding program.

When we reach the enclosure the elephants; Hope, Jungle Boy, and Chang Yim are in smaller enclosures. As I slowly walk towards the front gate Liz is quick to point out that Hope likes to throw things, and even though he’s in his smaller enclosure, I need to give him a wide berth; and as if on cue, Hope kicks up a fuss and hurls dirt outside his enclosure.

I watch as Liz pulls out a basket made from a red fire hose and begins stuffing it with corn stalks, as she stuffs she explains that once the elephants find it, they will toss it around and eat the stalks; the hope is that the elephants will play with the fire hose basket and that it will take a little effort for them to get all the food out.

Once the basket is ready we walk towards the enclosure, the cement pillars are close enough together that an elephant cannot get out, but far enough apart that people can easily walk through them.

As we get ready to walk into the enclosure we realize that the mahouts (the men who act as companions and caregivers for the elephants) have let Jungle Boy (who is 15 years-old) and Chang Yim (who is 6 years-old) out of their smaller enclosures and into the larger one, which is where we have just walked into so Liz can hang the fire hose basket.

Acting as a lookout I watch for Jungle Boy and Chang Yim as Liz quickly places the basket full of corn stalks and runs back to the enclosure wall, just as Jungle Boy – who has an impressive set of tusks – comes into view. 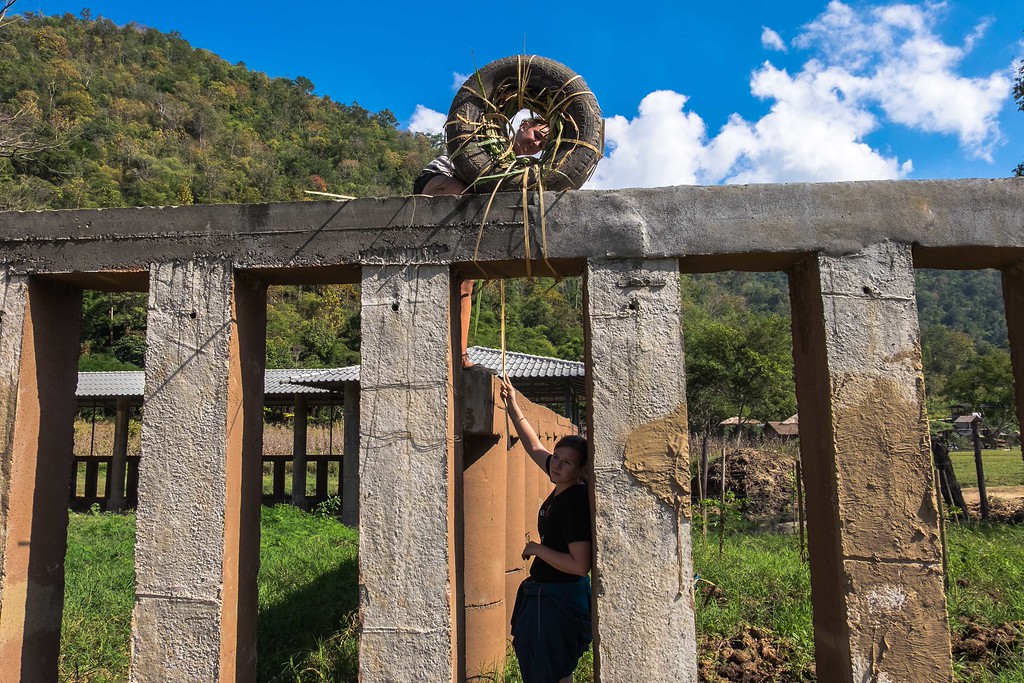 Liz secures a tire stuffed with melons, banana, and corn stalks to the top of an enclosure wall for bull elephants to play with.

Running out of the enclosure before Jungle Boy spots us, we grab Liz’s cart and walk around to the back of the enclosure, hoping that while Jungle Boy is busy with the fire hose basket, Liz can place two more surprises for the elephants; this time she’s placing small watermelons and cut bananas into two tires, then stuffs the remainder of the tires with corn stalks.

I stand just inside the enclosure as a look-out. Everything secure, we stand back and watch as Chang Yim finds a tire, knocks it off the wall, and bashes it with his foot and trunk to get to the food inside. This is exactly what Liz wants him to do.

Liz, who studied journalism in Canada, came to Elephant Nature Park as a two-week volunteer, fell in love with the elephants and the work, and decided to extend her stay – eventually becoming a long-term volunteer working on elephant enrichment full-time.

Coming up with different ways to stimulate the elephants is a daily activity for Liz and the rest of the staff at Elephant Nature Park: when not busy stuffing fire hose baskets with corn stalks or stuffing tires with food and tying them to the top of an enclosure wall, she is busy making balls of cooked rice, mashed banana and pellets to feed to elephants who have been starved prior to their arrival at Elephant Nature Park, or aiding Chrissy or Jodi with positive reinforcement – another fascinating program at the park.

I find myself marvelling at the work these women do, their dedication is apparent, as is their love for the elephants and other animals who reside at the park.

While Liz has a gift for elephant enrichment, Chrissy has a gift for using positive reinforcement to encourage elephants to do what she needs them to do: walking into the medical centre on their own accord, presenting their foot when asked, receiving medical treatments – all of these things are accomplished using positive reinforcement, force is never used.

This is what makes Elephant Nature Park unique, why other camps, parks, and sanctuaries are slowly trying to model themselves in a similar way; Lek is constantly asked to visit elephant programs, in hopes of receiving her stamp of approval.

Liz mushing together cooked rice, banana, and pellets and making balls for new elephants who experienced starvation prior to arriving at Elephant Nature Park.

It’s been a long and tough road for Lek, and the elephants who call Elephant Nature Park home; years of struggle to get the park set-up and running, protesting the government for animal rights, jail time; Lek has been given numerous roadblocks over the years, and she has never faltered from her path, from her desire to rescue and protect exploited elephants.

When I visited the Elephant Nature Park as a volunteer in 2012, some of the mahouts still carried a bull hook, they never used them, but they still had them in their hands from time to time.

Three years later, the bull hooks and weapons are 100% gone, elephants are given enrichment activities that encourage natural behaviour, positive reinforcement is used to encourage the elephants to cooperate with the staff when they require medical treatment.

Being a volunteer with Elephant Nature Park is hard work, you get grimy within minutes, and you never truly feel clean, no matter how many showers you take while you’re there, but that doesn’t matter because you know that you’re supporting an organization that is doing social good.

The dirt and grime from cleaning elephant dung, or watering mud holes, cutting corn, building fences, helping with enrichment, or any of the other activities you’ll be assigned is just one aspect of being a volunteer; those things can be washed away, but what cannot be washed away is the connection and love you’ll feel towards the elephants and other animals at Elephant Nature Park.

You’ll never be able to wash away the compassion you’ll feel for the torturous lives they have lived. And you’ll never wash away the peace and serenity you’ll feel when you sit on the platform in the early morning hours, watching the sky lighten and the sunrise, hearing the low roar or the excitable trumpet of elephants in the distance.

During my time in Thailand, I used the Lonely Planet guide, which was quite helpful in terms of the base planning – a good option for getting the basics together. Once that is done, I highly recommend speaking to locals and fellow travellers for up-to-date tips and advice.