Finding Controversy Along HWY 1A

As Canadians we’ve worked hard to polish our global image, however, no matter how shiny our image may (or may not) be, it will never change the fact that Canada’s past is not filled with sunshine and roses. Over the years I have learned a few facts about Canada’s past that I don’t remember learning in school (Maybe I skipped class that day? It’s totally possible). In school, I remember learning about the Underground Railroad and how Canada helped to free slaves. I don’t remember learning that in Nova Scotia African Americans were treated just as badly as they were in the United States during the time of slavery. However, this post is not about slavery (I could and will post something in the future), this post is about another piece of Canada’s past that I am truly horrified about. Internment Camps.

This past week (while driving along HWY 1A in Banff National Park) I came face to face with the Castle Mountain Internment Camp monument. If I had been driving faster, I may have missed it. However, I had just finished watching Grizzly Bear cubs wrestle in a meadow and my mind was still trying to process the experience. As I saw the sign, I pulled my car over, turned off the engine. There, on a tall blue sign, in white block letters, was the words ‘Castle Internment Camp’. I stared at those words for a few moments before getting out of my car and walking towards the monument.

The Castle Internment Camp monument was tucked neatly between the trees on the forest edge and consisted of a statue and a marble slab (which was to the left of the statue). As I walked closer, I was struck by the statue. The statue is a man in work overalls, wearing a wide-brim hat and work boots (which you can see in the photo above). However, the attire is not what caught my eye. It was the face.

A sadness washed over me as I starred into the face of the statue. This face embodies every emotion I feel when I hear (or read) the words Internment Camp. The hollow eyes, the down cast mouth & the high cheekbones give this statue an erie roughness. The chin appears to be slanted upwards and makes me feel as though this man is standing tall, not with pride, but with an unyielding temperament.

As I stood on the wet gravel, I noticed that pennies and other coins had been carefully stacked in the statue’s hand, as well as flowers and coins strewn at its feet.

I stood in front of the statue for a few minutes before turning around and walking back to my car. The excitement I felt after seeing the Grizzly bear cubs had subsided and I was now filled with sadness and curiosity. When I returned home later that day, I turned on my laptop and started to Google “Castle Mountain Internment Camp”. This is what I found…

July 13, 1915, the Castle Mountain Internment Camp was the largest internment camp in the Canadian Rockies and housed 660 enemy aliens during its operation. Based on the War Measures Act (1914), nationals of countries that were at war with Canada were interned as prisoners of war. These enemy aliens (as they were called), were not soldiers. They were civilians. The majority of the prisoners were Ukrainian and they were interned and used as military conscript labor on government projects. 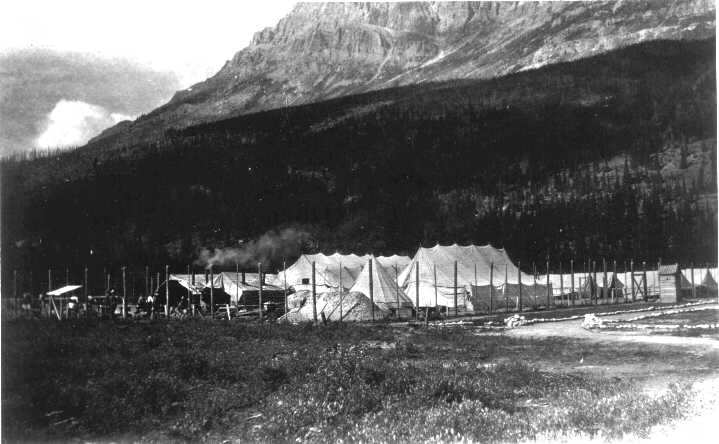 Photo of the Castle Mountain Internment Camp during operation

At the time of operation, the road (HWY 1A) between Banff and Lake Louise had not been completed, and the Castle Mountain Internment Camp was located at the terminal point of the road. The prisoner’s main focus was the completion of the road, however, due to harsh winters, the camp was relocated to military barracks located just outside the town of Banff (near the current location of the Cave & Basin). During their time outside Banff, the prisoners worked on cutting trails, clearing the Buffalo paddocks, sidewalk repair, quarrying stone for the Banff Springs Hotel and more. In the summer months, the camp would relocate back to the Castle Mountain location where they would continue to work on the road. This routine of switching camp locations happened until 1917 -when the camp was finally shut down.

The next time you’re in Banff (or when you visit for the first time), take some time to drive HWY 1A from Banff to Lake Louise. When you reached the monument, pull over and take a few moments to think about the sacrifices the prisoners went through. Think of the two years of forced labor as you drive from the monument to Lake Louise (The section of the road they worked on). I’m not proud of this piece of Canadian history, but I cannot change the past. All I can do is learn from it.

Note: In 2008 a settlement was reached with the Ukrainian-Canadian community. Part of the settlement was funding for educational purpose, and an interpretive center is being built at the Cave & Basin site. The monument and statue were erected near the actual Castle Mountain Internment Camp site by the Ukrainian-Canadian community. Information on the internment camp was taken from Wikipedia. As I gather more info, I will continue to add to the article.