Surprise! It’s A Night at the Grand Ole Opry

It’s raining, the air is warm and we cannot find a taxi to drive us from the Grand Ole Opry to our hotel on Music Valley Drive (which is less than a 10-minute drive away). If we had stayed in downtown Nashville, we could have had our choice of taxi drivers – and the rain would not have been an issue. But, alas, there we were, getting soaked in the rain while begging drivers to take us to our hotel. And while I was not thrilled about paying $25 USD for a ten-minute ride, nothing could dampen our spirits after our night at the Grand Ole Opry.

I love surprises, even though they make me emotional. When Bailey and I came up with the odd idea of driving to Idaho via Nashville (which makes absolutely no sense) we were determined to have epic adventures. Nashville would be our first stop and the perfect place to get our fun on.

I popped onto Instagram looking for inspiration in the form of restaurants and cool neighbourhoods, then logged onto Twitter and asked a local travel expert, Kristin Luna, for tips. Soon, an evening at the Grand Ole Opry was in the works (a place in Nashville that Bailey was dying to visit) and I decided to keep it a secret for as long as possible.

Instead of telling her about going to the Opry, I told (a week before we left) her there was a surprise during our road trip. The very thought of it almost drove her over the edge. She was in knots, texting me to find out what it was. In an effort to make sure she didn’t guess, I told her I would reveal all when we got to Oklahoma, that way Nashville wouldn’t be part of her guessing strategy.

All was well until the day we were driving to Nashville and she started talking about wanting to see a show at the Grand Ole Opry and how she’d love to see the Walmart Yodeling kid in person. I thought she had figured it out, or that her youngest sister had spilled the beans on me.

A few hours later, less than two hours before the show, I told her of our evening plans and her reaction was sheer perfection. 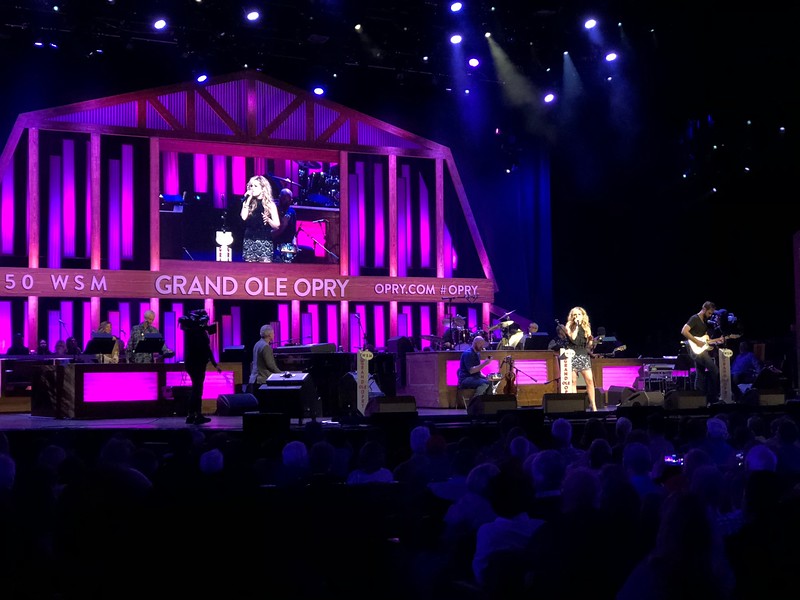 It all started on November 28, 1925, with the birth of the WSM Bam Dance program on Nashville radio. Featuring performances from the likes of Minnie Pearl and Ernest Tubb. In time, performances were held at the Ryman Auditorium and broadcast over WSM 650AM radio. A gorgeous auditorium with seating for 2,362 people, the Ryman was home to the Grand Ole Opry from 1943 to 1974 when the live show was moved to its current home, the Grand Ole Opry House.

Now, more than 90 years later, Nashville is known as Music City, has launched thousands of country music careers. Today, performers stand on an 8ft hardwood circle taken from the Ryman Auditorium and entertain country music lovers from around the world.

Sitting the plush church pews around the Opry stage is a truly unforgettable experience. You can feel the energy, the history. The auditorium is built in such as way that there is no such thing as bad seats. 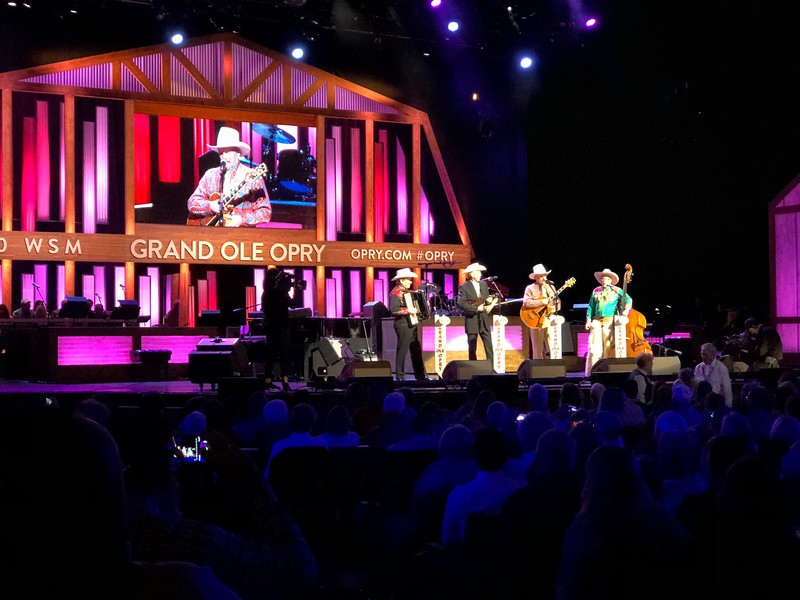 Country Singers, Riders In The Sky

The moment the lights went down and the ‘On Air’ sign glowed bright red, my eyes were glued to the Opry stage. I enjoy country music, but I have never been a die-hard fanatic.

Which is why being in the audience for the Grand Ole Opry radio show was one of the best musical experiences I have had in a long time.

From the moment Jeannie Seely (and Opry member for over 50 years) to the moment Point of Grace sang their final song, I was completely in love with the various styles and sounds of the dozen performers who took the stage throughout the night. I still chuckle about the performance by Riders In The Sky.

Our minds were blown when Miss Violet took the stage. A feisty woman who swears by cornbread and beans and never took a drink of alcohol in her life. Playing a fiddle she built in 1934, she captured everyone’s hearts. Honestly, we could have listened to her all night long.

The biggest highlight of the night took place towards the end of the evening when Ricky Skaggs introduced Mason Ramsey, an eleven-year-old boy best known as the Walmart Yodeling Kid who had appeared on Ellen. Needless to say, Bailey was ready to burst with excitement, and within moments of him taking the stage, I was too.

A big personality in a tiny body, this talented boy will definitely go far!

PLAN A VISIT TO THE GRAND OLE OPRY

You don’t have to be a die-hard fan to enjoy a night at the Opry – if I could, I’d give you the number of the hipsters who sat in front of us, clearly there to see Mason Ramsey. A night at the Grand Ole Opry is a wonderful introduction to Nashville, the perfect way to start your time in America’s Music City. Our time was not nearly enough (plus, you know, rain), which means I will definitely be coming back to Nashville – and if possible, the Opry as well.

The Grand Ole Opry House is located on the outskirts of the city (2804 Opryland Drive). While there are plenty of hotels nearby, finding a taxi at the end of the show can be challenging if there is something happening downtown (trust me, I know this from experience). Your best option, according to Kristin, is to use a service like Lyft instead. If you have a car, parking at the Opry house is free, but be prepared for a slow exit as traffic can be quite bad.

Tickets can be purchased through the Opry website and range in price from $40 USD to $99 USD per person depending on the type of performance. Visit the Opry calendar for more details.