When I started researching my trip to Myanmar, one of the things I had decided to do was the circle train line. A three hour journey, the train ventures into the outer edges of Yangon, for K300, which is about 31 cents.

Scheduled to leave at 1:40 pm, I arrived early, making my way to the ticket booth on platform 7 at Yangon station. Quickly discovering that in Myanmar you need to push your way to the front, otherwise the locals will just shove their way ahead of you. After a couple minutes of jockeying my way forward a man appeared, asking me to follow him inside. Offering me a seat, he took out a receipt book and began writing out my train ticket. 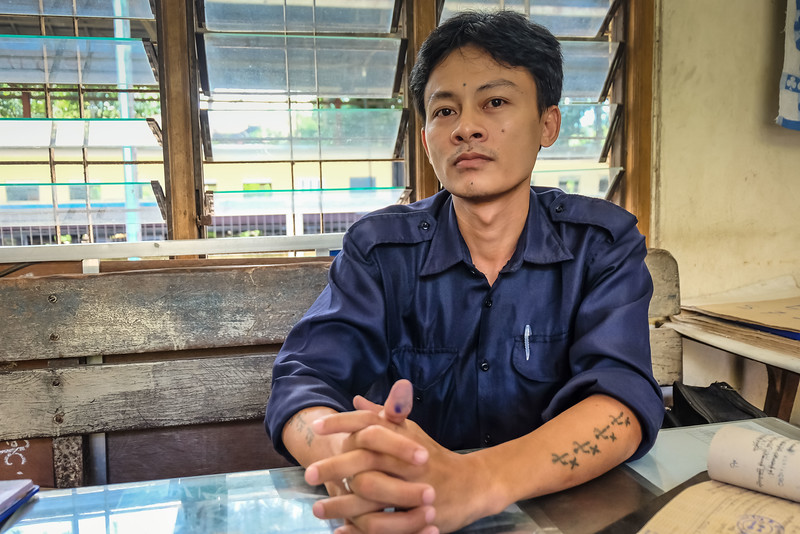 Ko Ko, the man at the window introduced himself, then asked where I was from, why I was in Myanmar, for how long. He was genuine and lovely and forgot he was supposed to be selling train tickets to locals.

Ko Ko’s love for travellers was apparent, a pair of female backpackers stopping by to say thank-you as he and I chatted. When 1:40 pm came and went, it was Ko Ko who came looking for me on the platform and let me know when the train would arrive, and that there was a platform change.

While waiting for the train a small Burmese boy decided I was to be his next playmate. Our game consisted of him yelling “Hello”, me acting surprised, and him giggling. 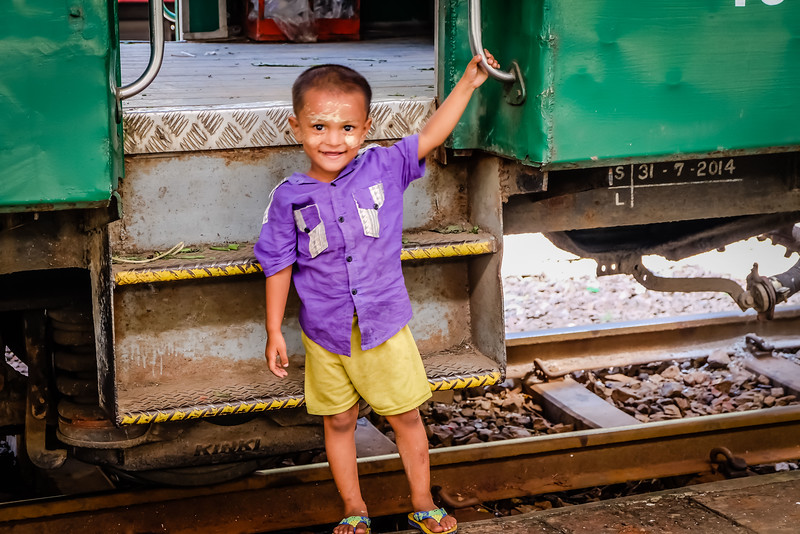 The train station is not as chaotic as I had thought, and as I wait for the train to arrive I watch local women carrying heavy loads on their heads, mothers and children pass by. Each one staring right at me as they walk past me, a blank expression on their faces until I say Mingalaba (hello in Burmese). 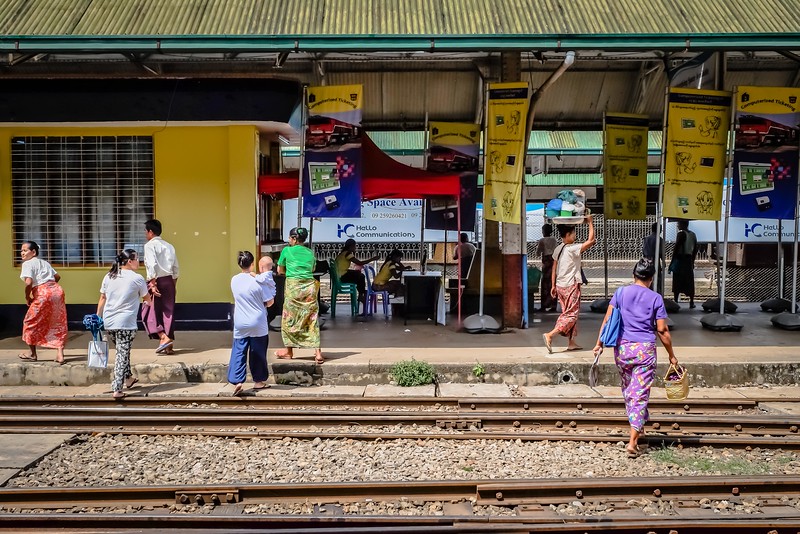 At 2:30 pm the train arrives on platform 4, and I quickly board and find a seat. Ko Ko, knowing I wish to take photos, has put me on a local commuter train that circles the city. Long hard blue benches line each side of the train car, the windows have metal shutters, and small fans are mounted to the ceiling. Only one of them works. Signs are posted to tell passengers that there is no smoking, no kissing, and no littering allowed on the train. The “no littering” sign is the only one people seem to ignore. 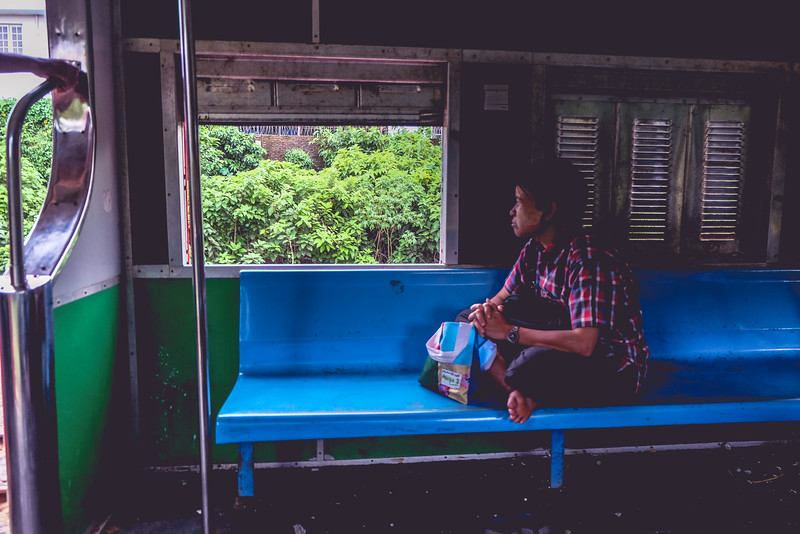 Perched in a way that allows me to look out the window, I take care to make sure I’m fully covered at all times – no knees showing. Naturally, locals stare, and I smile and say Mingalaba, and that generally diffuses things quickly. I’m a spectator on this train, watching as men, women, and children walk through the train selling everything from eggs to water to apples to sliced watermelon to samosa and cigarettes. 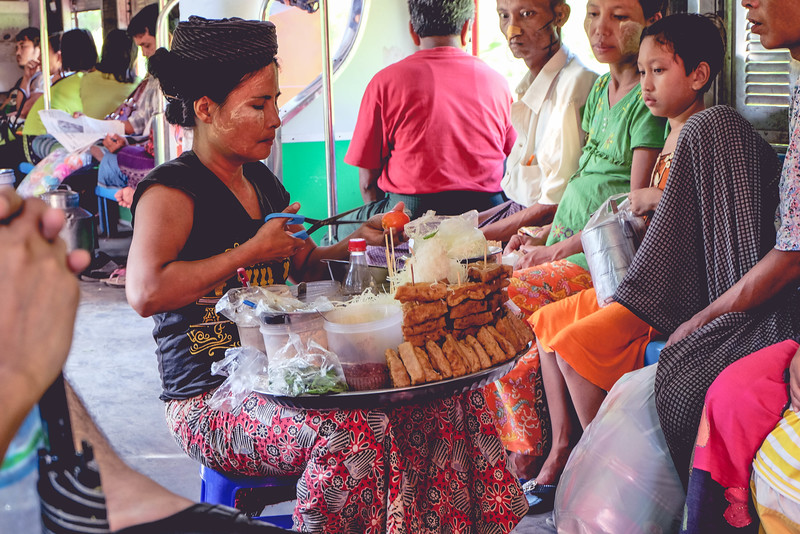 A Burmese woman sells fried tofu stuffed with chillies, a soy-based sauce, and shredded cabbage on the circle line in Yangon.

Over time the scenes outside the train change. Urban areas where garbage lines the tracks and locals live in corrugated metal shacks. Soon the metal shacks disappear and are replaced with wooden huts on stilts, the ground muddy, garbage laying about, and children running around naked from the waist down. As we reach the outer edges of the city the buildings disappear and the huts are made from banana leaves. The dirt, mud, and garbage are replaced with green paddy fields filled with pennywort.

Riding on a commuter train means we stop at every station along the route. Some stations are merely a sign and a wooden bench, others some with a small shelter and ticket window, and a couple is quite large.

The train allows me to sit in the background and observe local life in Yangon. Women, young and old selling fresh fruit and vegetables at some stations, children playing, men squatting by the tracks and watching the trains roll by. Markets are set up in a couple stations, some vendors selling ridiculously close to the tracks. When the train arrives in Danyingon station my senses are on overload. The station floor is covered with fresh fruit and vegetables laying on pieces of cloth, women carrying colourful plastic baskets. This is the heart of everyday life in Yangon, and it’s utterly fascinating to me.

As we wait to leave Danyingon station I spot a small child looking at me, I smile, the child and mother laugh. I am loving these innocent interactions. My difficulty acclimating in Yangon has disappeared. I’m now eager to see more of Myanmar.

As daylight begins to fade, I focus my camera inside the train, capturing a few more glimpses of local life before putting my camera back in my bag and arriving back at Yangon Central Rail Station.

Myanmar, I think I’m ready for more. Let’s do this! 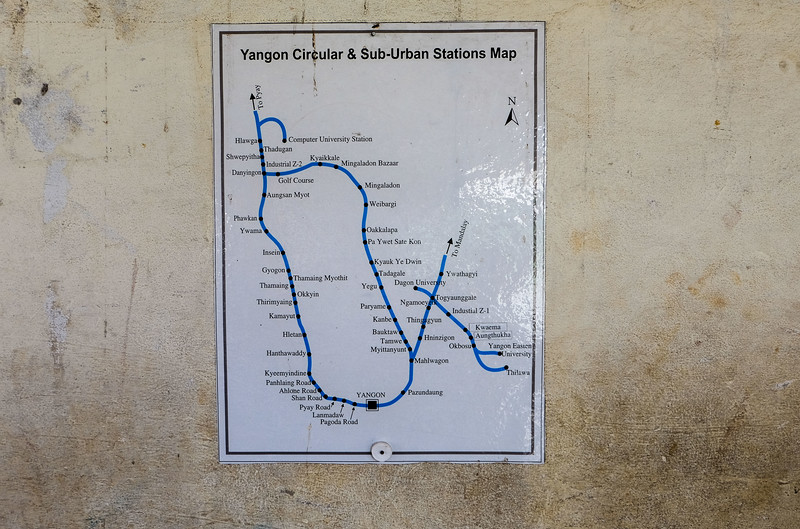 A map of Yangon’s circle line

Visiting Yangon? If you’re interested in killing 3-4 hours and getting a glimpse of daily life in Yangon, I highly recommend riding the circle line. The train runs several times a day, and there are local trains, as well as air-conditioned trains (where the air conditioning rarely works). I recommend taking a local commuter train. It can be warm, but it’s not horrible.

Ladies, wear long pants or skirts and remember to be covered at all times. Myanmar is a very conservative country, and it’s important to adhere to local standards in terms of dressing.

A ticket for a local commuter train will cost about K300, which is about 31 cents. A steal of a deal.

During my time in Myanmar, I used the Lonely Planet guide, which was quite helpful in terms of the base planning – a good option for getting the basics together. Once that is done, I highly recommend speaking to locals and fellow travellers for up-to-date tips and advice.